The annual Cannes Film Festival is known as much for its glitz and glamour as it is for its movie-industry credentials, with one of the most interesting and exciting red carpets of the year. The stars, stylists, and fashion houses truly go above and beyond, from the finest couture gowns to the most precious of jewellery.

The 75th anniversary of the annual film festival was celebrated this year, and the stars donned some particularly stunning ensembles in honour of the occasion. Here are our ten favourite looks from the 2022 Cannes Film Festival, from Anne Hathaway in Armani Privé to Viola Davis in Alexander McQueen and Diane Kruger in Oscar de la Renta

This year, Anne Hathaway made her Cannes Film Festival debut, promoting her new film, Armageddon Time. While she made a number of stylish appearances that will go down in fashion history, it was this elegant Armani Privé moment that stood out the most. Her gleaming column gown was paired with a matching wrap that cascaded down into a train and a one-of-a-kind Bulgari necklace. 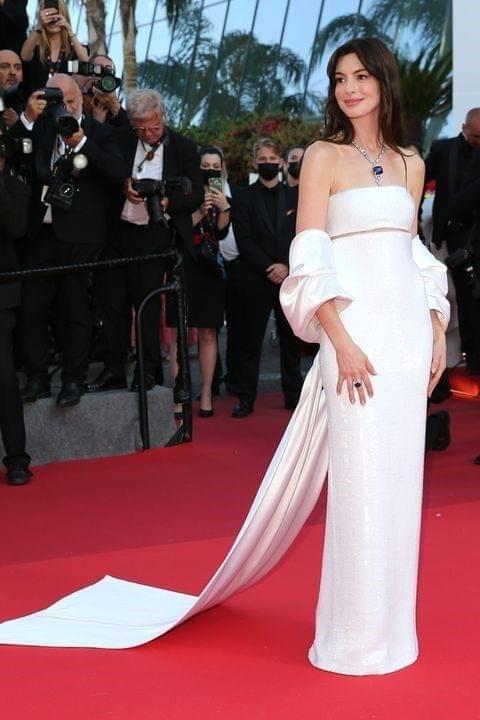 Diane Kruger was a vision in scarlet for The Innocent's 75th anniversary screening. The actress walked down the red carpet in a halterneck Oscar de la Renta gown with a voluminous puffball skirt that billowed gently. She accessorised with strappy gold sandals and a statement necklace by Chaumet, which came with a matching bracelet and ring. 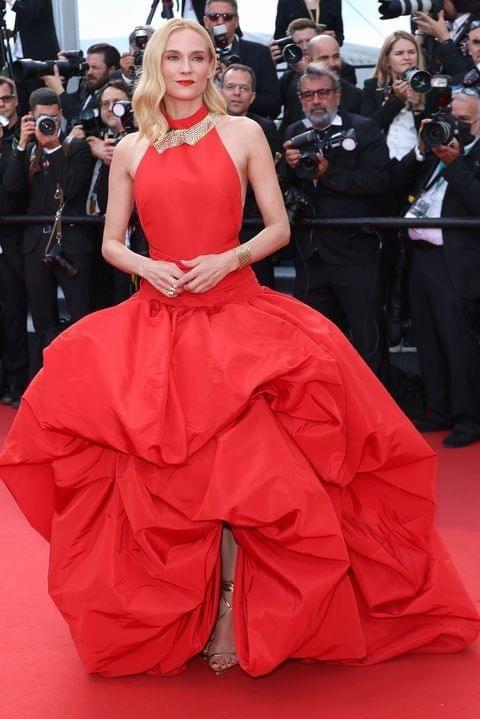 Deepika Padukone, one of the official jury members for this year's Cannes Film Festival, wore a series of stunning looks over the course of two weeks, but she saved the best for last. The actress wore a custom-made creation by Indian designer Abu Jani Sandeep Khosla to the Closing Ceremony, which featured ruffles throughout and a beautiful pearl-encrusted collar. 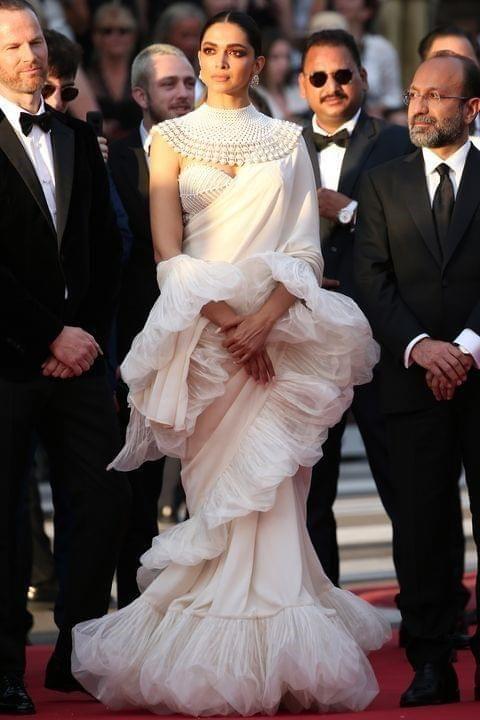 Bella Hadid is a regular on the Cannes red carpet, and she often dresses in vintage for the occasion. She went back into the archives this year, collaborating with stylist Law Roach to pull this incredible Gianni Versace gown from 1987. The strapless gown had a figure-hugging mermaid silhouette with a velvet skirt and draped detailing around the hips that culminated in a dramatic bow at the back. Glittering Chopard earrings added the finishing touch. 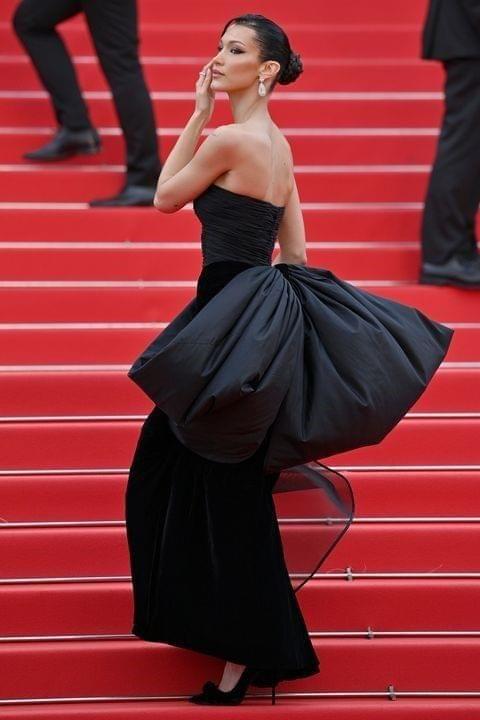 Isabelle Huppert looked stunning in a fitted green Balenciaga gown with gloves, boot leggings, and a hip-high split at the premiere of Forever Young. She completed her look with the ultimate chic accessory: dark, thick-rimmed sunglasses. 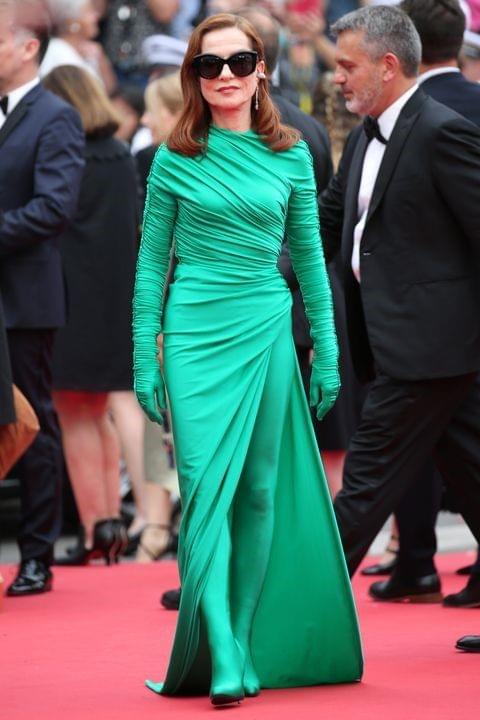 At the 2022 Cannes Film Festival, Elle Fanning had a princess moment, sweeping down the red carpet in a tulle Armani Privé gown with a beaded bodice. She accessorised her blonde curls with a delicate bow made from the same fabric as her gown, and Chopard jewellery added the perfect finishing touch. 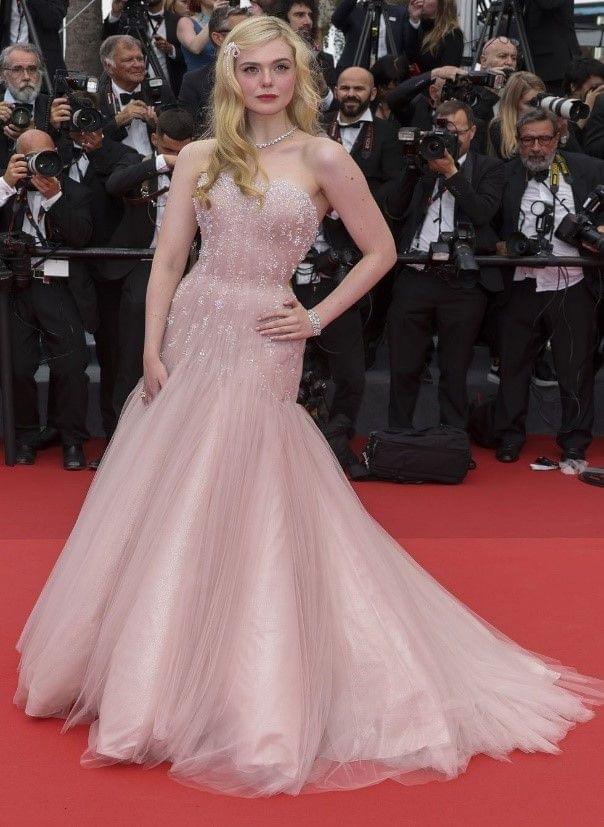 On night one of this year's festival, Lashana Lynch wore one of our favourite looks, an elegant white gown by Fendi, to the Opening Ceremony. The high-necked gown had a delicate lace pattern all over it, as well as side splits and glistening ribbons that coiled around her arms. The dramatic Chopard statement earrings added to the drama. 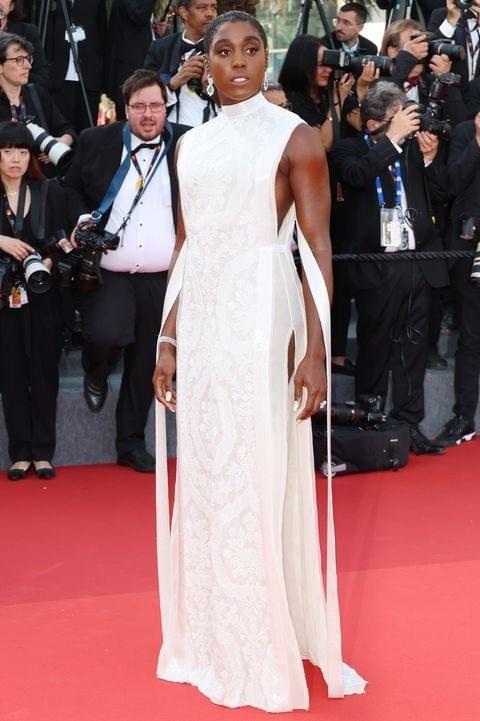 At the Cannes Film Festival this year, Katherine Langford walked the red carpet in a glittering Prada gown covered in silver sequins, exuding the confidence of a seasoned professional. The stunning gown had a sculptural half-bow detail on the back that looped down into a double train. 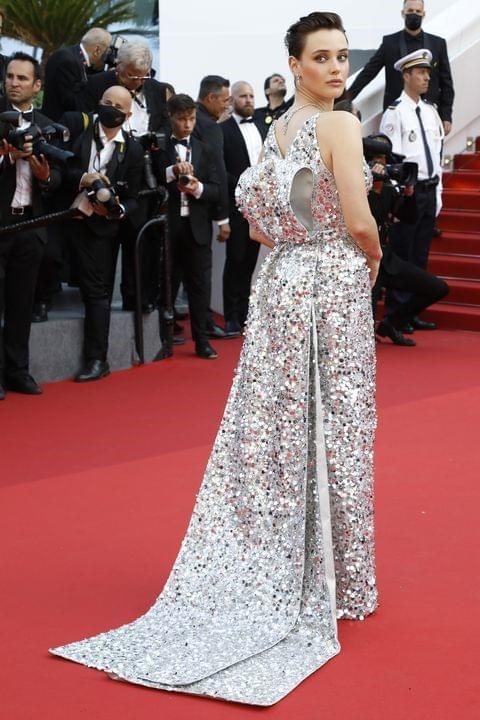 Viola Davis wore a number of bright looks to the Cannes Film Festival this year, including this sunshine-yellow Alexander McQueen gown and a number of other block-color ensembles. The actress wore a corseted off-the-shoulder dress with a ruffled neckline and full pleated skirt to the Top Gun: Maverick premiere, and she accessorised with equally colourful Boucheron jewellery. 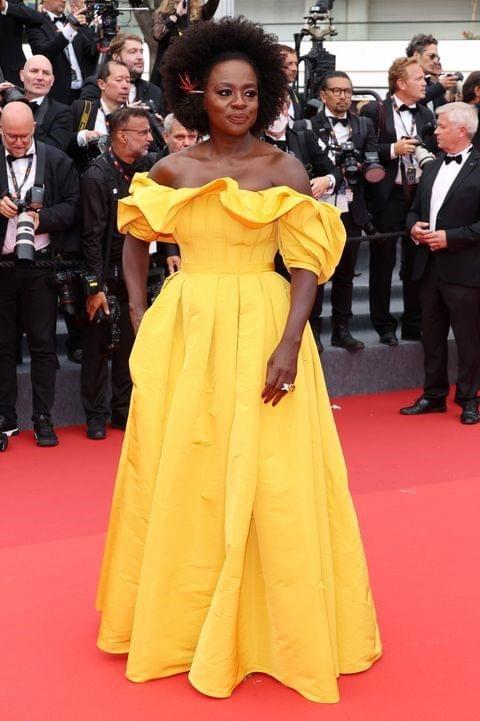 Carla Bruni gave a masterclass in simple elegance at the Triangle of Sadness premiere, walking the red carpet in a softly sparkling lilac Celine gown with spaghetti straps and a cowl neckline. She accessorised with color-coordinating Bulgari jewellery and wore her hair long and loose. 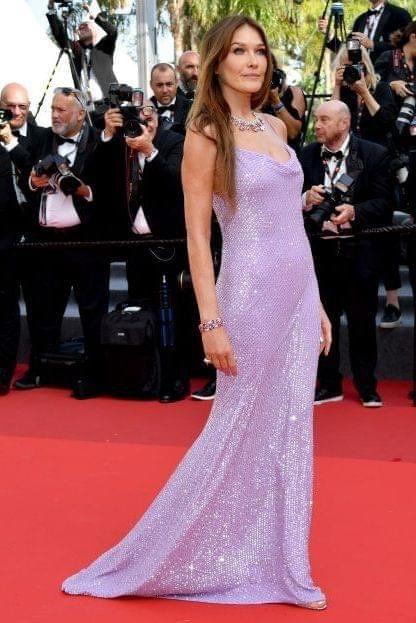